Malcolm X sat between a group of slightly smiling Oxford students attired in morning dress (with a black cocktail dress for the lone female student standing behind him). He is in his recognizable slim dark suit, narrow tie, and horn-rimmed glasses. The sober and simple attire was the unofficial dress code of the Nation of Islam, but Brother Malcolm — by then also known as Malik el-Shabazz after converting to Sunni Islam — had a longer history with the style. 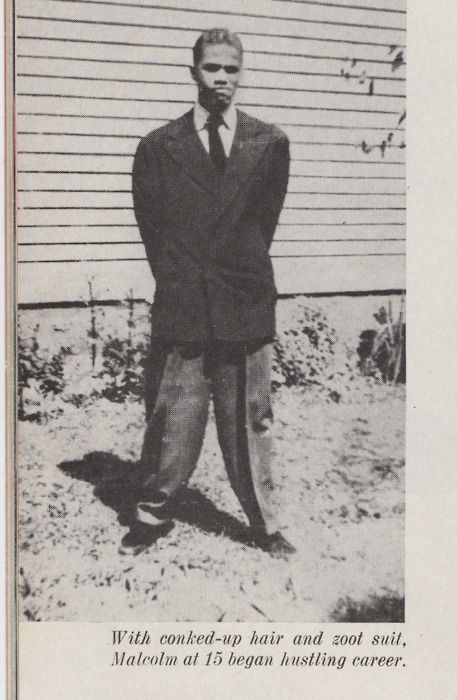 In his autobiography, he recounts that his shift from small-time hustler to professional member of Harlem’s underworld was marked by being provided with an expensive, fashionable suit to replace his flashy zoot suit. [1]

The zoot suit, with its overexaggerated proportions and bright colors, symbolized 1940s youth culture at best, and idleness, criminal tendencies, and the degeneracy of jazz at worst. Cultural historians and fashion scholars have discussed the link between fashion and race in this period, particularly around the zoot suit, which culminated in what is known as the “Zoot Suit Riots” of 1943. [2] The negative connotations aroused by the Zoot suit are no coincidence: it originated in Harlem by a Black prizefighter and his tailor to exaggerate his small stature and was quickly taken up by jazz musicians and bandleaders like Duke Ellington and Cab Calloway. [3] Ellington, Calloway, and others took the Zoot suit to nightclubs and Hollywood sets, whereupon it became the symbol of hip and cool masculinity — Black masculinity — and resistance. The Zoot suit was particularly attractive to Mexican American and Mexican immigrants in Los Angeles, who found the style suited their own countercultural currents, as anti-Mexican sentiments were stoked by nativist white Californians. It wasn’t merely the voluminous amount of fabric that offended the wartime establishment, but the voluminous amount of space young men (and some young women) of color occupied while wearing the Zoot suit. This space was threatening for many reasons, of which sex was one that journalists of the period found alarming. [4] Even before the Zoot Suit Riots in the summer of 1943, Hollywood producers were already attempting to ban their appearance on the silver screen. [5] This essay focuses on the uses of each phase of the civil rights movement made of fashion, and how this influenced African American style and politics.

It is striking to consider how deeply entwined fashion was with Malcolm X’s burgeoning political awareness. For young Malcolm Little, or Red, the Zoot suit marked his participation in anti-establishment counterculture and his conceptualizing of his masculinity in an era that remained marked by lynchings of Black men who transgressed social and sexual norms. The tidy, expensive suits stolen from downtown — his baptism into the criminal underworld. For Malcolm X, the dark suit and tie marked his spiritual awakening as well as an external symbol of his praxis. When considering the civil rights movement as a whole, fashion and style has marked both political expressions and resistance of the men and women who participated in the most significant grassroots resistance and civil disobedience movements in United States history. 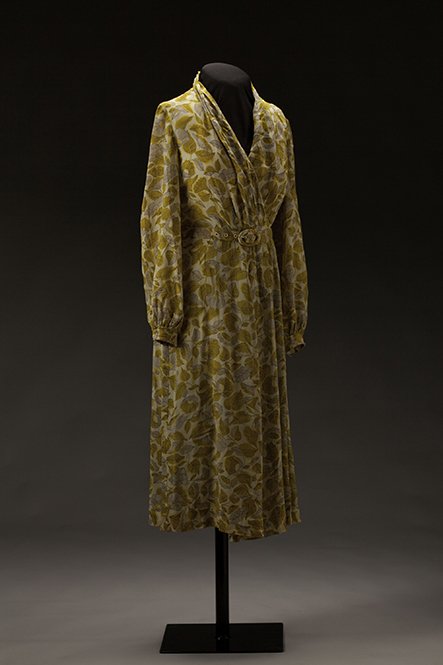 Rosa Parks’s simultaneous work as a seamstress and as secretary for the Montgomery branch of the NAACP reveals the deep ties between Black style and activism. In fact, she was carrying a dress she was in the process of sewing when she refused to give up her seat to a white man in 1956. This dress of golden yellow and silver flower print, with a wrapped bodice, puffed wrist, and matching belt, is now housed in the collections of the National Museum of African American History and Culture (NMAAHC). Dress and style is significant throughout the civil rights movement, from the prim, tailored clothing of the 1950s to the African-inspired print of the Black Arts movement of the 1960s to the militant black turtlenecks and denim of the Black Panther Party of the 1970s. The aesthetics of the civil rights movement spread the message of Black pride and resistance to the masses even more so than pamphlets and speeches. Mainstream narratives focus on the 1960s & 70s sartorial trends as a symbol of youth culture, but for Black Americans, the shifting fashions were literally to save their lives.

Four young women sit around Reverend Martin Luther King, Jr. in a classroom, their hair neatly pressed and their blouses and calf-length skirts equally so, as they furiously write notes. They are called the “Bennett Belles,” students at the other women’s Historically Black Colleges and Universities (HBCU) — Bennett College — and paragons of mid twentieth century Black womanhood. The story of the Greensboro Four, a group of North Carolina A&T State University students whose sit-ins at the Woolworth lunch counter sparked a movement, is much better known. The involvement of Bennett’s students is less well-known, both because of the male-centric lens of history and the “culture of dissemblance” [6] that kept young Black women self-effacing and quiet about their accomplishments. Nevertheless, the story of youth protest and resistance in the 1950s and 1960s is one of the tension between respectability and radicalism, which was most apparent in dress. 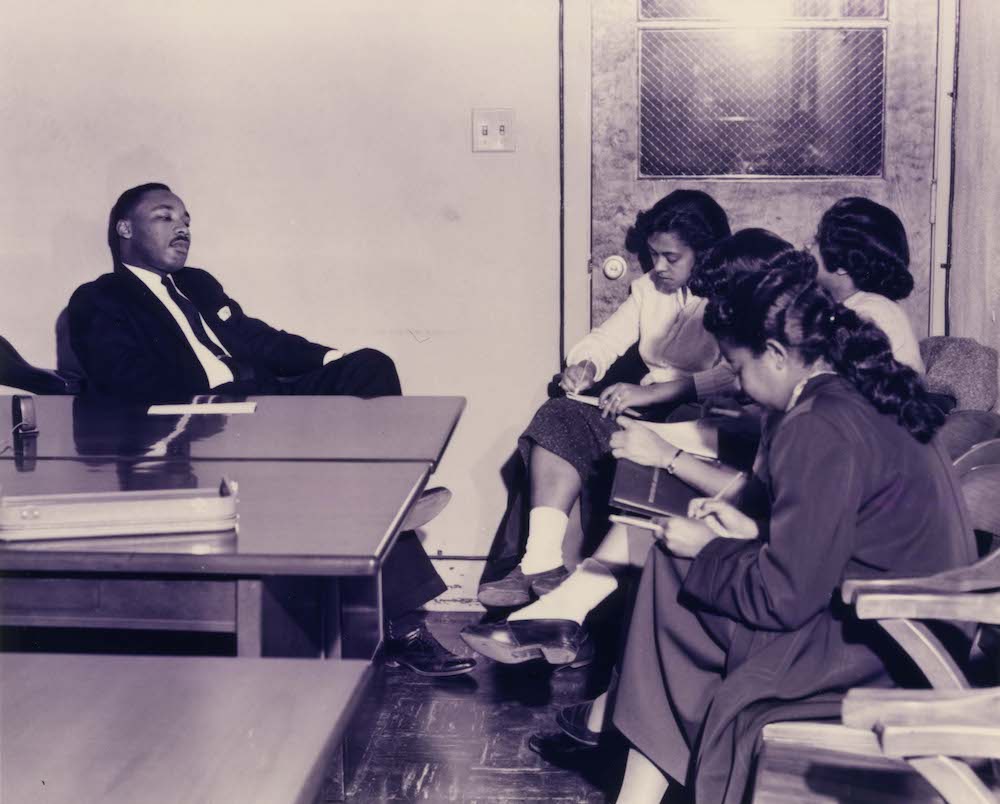 There are copious photographs of young Black men and women staging sit-ins at lunch counters and resisting police brutality — all in the crisp shirts, blouses, skirts, and trousers of the period. Bennett Belles themselves were taught to set the table, how to move and speak, to be the perfect hostess and housewife; the Bennett way of life “recognized the pressures of racial judgement which they would confront as soon as graduation was over.” [7] The emphasis on respectability was supposed to provide for young Black men and women a veneer of protection as they entered all white spaces with the intention of disrupting social norms. HBCUs like Bennett College, North Carolina A&T State University, Howard University, Morehouse, and others prided themselves on educating and creating upwardly mobile Black citizens whose external appearance was no different from predominantly white institutions. Ironically, during the civil rights movement, HBCU student activists found themselves rebelling against these restrictive campus rules as they realized that no amount of ties and prim blouses and polished shoes would diminish racism.

By the 1960s, Black students began to shed their relaxed hair and respectable clothes for denim and natural hair. Tanisha D. Ford recounts this particular shift in fashion for women members of the Student Nonviolent Coordinating Committee (SNCC) in Liberated Threads: Black Women, Style, and the Global Politics of Soul. Young Black women not only found themselves vulnerable to sexual violence in these prim and proper clothes, but they were impracticle garments when facing the possibility of being arrested, hosed down, assaulted, and imprisoned. [8] Furthermore, these college educated young Black women found themselves marching shoulder to shoulder with working class and rural Black Americans, whose homespun clothes and denim suddenly became a point of solidarity. As these SNCC activists shed their fancy clothes and shoes in exchange for overalls and cotton shirts, they also refused to straighten their hair into the accepted hairstyles for a middle class Black woman. [9] Singer and actress Abbey Lincoln caused a firestorm in 1961 when the cover of her album, Straight Ahead, featured her natural hair. A few years later, young Black women — and young Black men — arrived at activist meetings and protests with their curls, coils, and kinks rising as high in the sky as their fists. 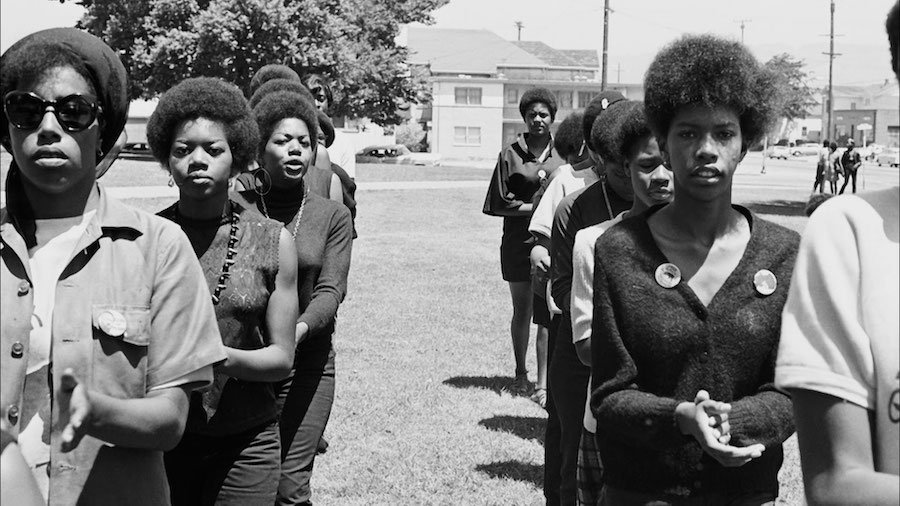 Black Panthers at a rally in Oakland, Calif., in 1969, as seen in the documentary “The Black Panthers: Vanguard of the Revolution.” (Photo: Pirkle Jones and Ruth Marion-Baruch).

The Black Power movement of the 1970s had its roots in the previous two decades, but the cultural and social turmoil after the assassinations of Malcolm X in 1965 and Martin Luther King, Jr. in 1968 created a clean break with the respectability roots of the early phase of the civil rights movement. Black young women and men melded their burgeoning natural, grassroots style with African influences to declare that Black was indeed beautiful–that finding identity in a “pure” African heritage would inspire greater racial uplift and pride than adhering to white/mainstream American norms. The Black Panther Party’s mission spread outside of Oakland, California not solely because of their militancy but because of the iconic images that circulated of their leaders adorned in proud afros and uniform of black clothing. Angela Davis’s afro’d and denim-clad image circulated even further, thus solidifying the tightening link between Black pride, militant activism, and style. [10]

By the end of the 1970s, the changing political and social winds — and the perception of widespread Black middle class achievement and assimilation after the passing of the Civil Rights Act of 1964 — saw afros shrink and African inspired clothing fade away. However, contrary to popular belief, the relationship between fashion and Black activism did not disappear. The booming beats and scratches of hip-hop records that emerged from the inner cities of the Bronx in the late 1970s heralded a new phase. Working class young Black men and women rejected their marginalization in 1980s society by adorning themselves in flamboyant clothing that signaled their hood, their block, their street from thrift stores, street hustlers, and “hot” (aka stolen) trunk sales. [11] Renowned designer Dapper Dan, whose knock off designer goods and luxury refashionings, defined the age. His eponymous memoir is a tribute to Black culture’s continuous belief in making a way out of no way and the historical roots in aligning Black uplift and protest with fashion. Furthermore, the relationship between protest and fashion is both a negotiation and a rejection of mainstream norms, which has been a major influence on the development of Black adornment and style over the course of the twentieth century.

[1] By the time of his talk, he had converted to Sunni Islam and took the name Malik el-Shabazz, but he will be referred to as Malcolm X, since it is more recognizable.

[2] Stylin’: African-American Expressive Culture, from Its Beginnings to the Zoot Suit by Shane White & Graham White; Zoot Suit: The Enigmatic Career of an Extreme Style by Kathy Peiss; The Power of the Zoot: Youth Culture and Resistance During World War II by Luis Alvarez; Race, Police, and the Making of a Political Identity: Mexican Americans and the Los Angeles Police Department, 1900-1945 by Edward J. Escobar. 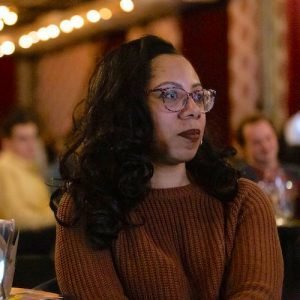 Angela Tate is a PhD Candidate in History at Northwestern University, where her research looks at Black women's internationalism and performance through material culture, radio, and texts. Her work has been highlighted at numerous conferences and publications, and she also has an extensive background in public history. 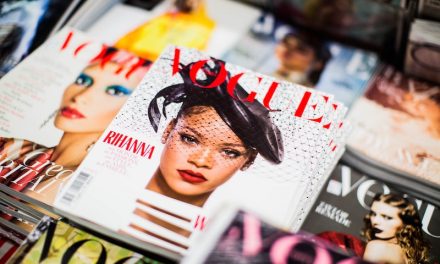 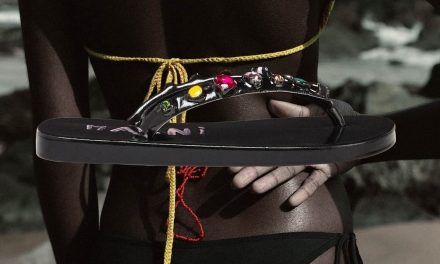 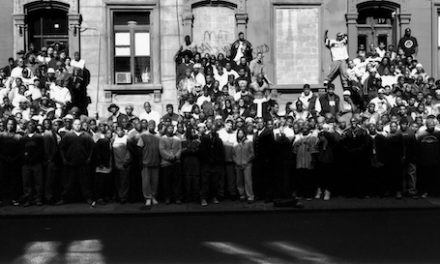 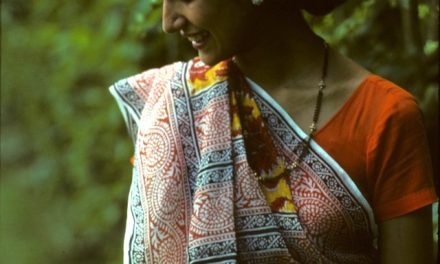