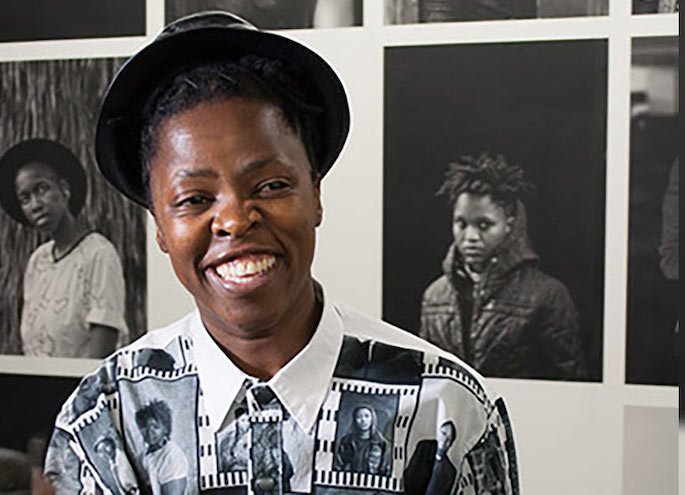 Muholi is a South African visual activist and photographer. For over a decade they have documented Black lesbian, gay, bisexual, transgender and intersex people’s lives in various townships in South Africa. Responding to the continuing discrimination and violence faced by the LGBTI community, in 2006 Muholi embarked on an ongoing project, Faces and Phases, in which they depict Black lesbian and transgender individuals. Muholi’s self-proclaimed mission is “to re-write a Black queer and trans visual history of South Africa for the world to know of our resistance and existence at the height of hate crimes in SA and beyond.” These arresting portraits are part of Muholi’s contribution towards a more democratic and representative South African homosexual history. Through this positive imagery, Muholi hopes to offset the stigma and negativity attached to queer identity in African society.

In a more recent ongoing series, Somnyama Ngonyama (Hail the Dark Lioness), Muholi becomes both the participant and the image-maker, as they turn the camera on themself. Experimenting with different characters and archetypes, Muholi’s self-portraits reference specific events in South Africa’s political history. Through exaggerating the darkness of her skin tone, Muholi reclaims their Blackness, and offsets the culturally dominant images of Black women in the media today.

Muholi was born in Umlazi, Durban and lives in Johannesburg. They studied Advanced Photography at the Market Photo Workshop in Newtown, Johannesburg, and in 2009 completed an MFA: Documentary Media at Ryerson University, Toronto. Muholi has won numerous awards including the ICP Infinity Award for Documentary and Photojournalism (2016); Africa’Sout! Courage and Creativity Award (2016); the Outstanding International Alumni Award from Ryerson University (2016); the Fine Prize for an emerging artist at the 2013 Carnegie International; and a Prince Claus Award (2013), among others. Muholi’s work has been exhibited at Documenta 13; the South African Pavilion at the 55th Venice Biennale; and the 29th São Paulo Biennale.

See all content linked to Zanele Muholi in The Library.