Occasionally, designers and creative teams make the provocative decision to cast only black models for a fashion shoot, runway show, or campaign. In a world predicated on global white supremacy, white and lighter skinned people of color hold privileged, if not normative positions. The inclusion of people of color is, therefore, often not neutral. To cast only black people is a radically political move. It can also be used to create the allure of exoticism, to conjure a sense of camp and/or shock value, or worst, to shallowly evoke the values of inclusion.

The Hermès Niloticus bag, in its rare crocodile skin, signifies luxury and exclusivity, to borrow a term from British cultural theorist Stuart Hall. A well-worn, patch-worked pair of skinny jeans signifies counterculture and eccentricity. Likewise, when famed Vogue editrix Diana Vreeland gushed over a preference for black people in the seventh chapter of her memoir D.V. – “Blacks are almost the only people I can stand to look at nowadays.” – it was more an aesthetic than political proclamation. She was not signifying her solidarity with the “Black Is Beautiful” movement, but declaiming her fetishization of difference, novelty, and exoticism. Black bodies are often not neutral in fashion spaces; the presence of black people is often used to signify positive and negative values (sometimes simultaneously).

The exploitation of people of African descent’s image has a long history. Since at least the Renaissance, black people have had a fraught relationship with their representation and self-representation in Western art. For example, it was not unusual for kammermohrs, or black court servants, to be posed alongside nobles in European portraiture. Although frequently categorized as “servants” and “pages,” the black men and women portrayed in Dutch Golden Age paintings were de facto enslaved people gifted or purchased by those who could afford them as status symbols. Black bodies were portrayed – and indeed were regarded – as the bounty of empire, trophies from distant shores, and material manifestations of colonial ambitions. This practice was not a demonstration of early modern inclusivity. Portraitists and their wealthy patrons signaled to the world that they were moneyed and cosmopolitan with their possession and strategic display of black courtiers and maidservants.

Today, fashion brands are often guilty of doing the same thing. There is a plethora of brands using blackness as an accessory that can be put on and off at a whim and exploited as a marketing tool. Case in point: Marni’s Spring/Summer 2020 campaign [Fig. 1 and Fig. 2]. Marni tapped up-and-coming Afro-Brazilian talent Edgar Azevedo to photograph models for their ad. All of the models are dark-skinned, an expression of Azevedo’s valorization of the beauty of richly melanated skin. The problem occurred when Marni’s creative team superimposed products and phrases such as “Jungle mood,” “Barefoot in the jungle” and “Tribal amulet” over the photographs. Products were conflated with exploitable black bodies; black people were transformed into exotic conduits for luxury commodities. This is an example of an all-black casting signifying the exotic, a dynamic that harkens back to blackamoor imagery. 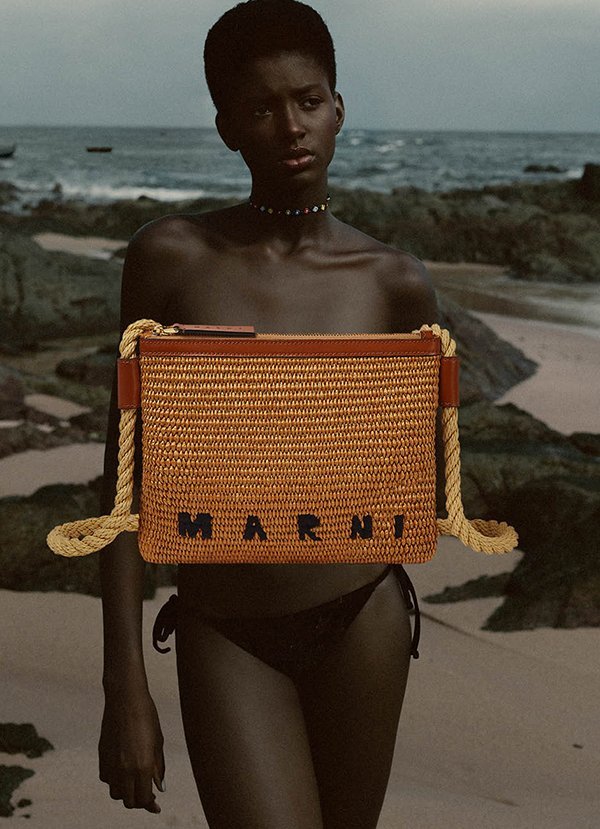 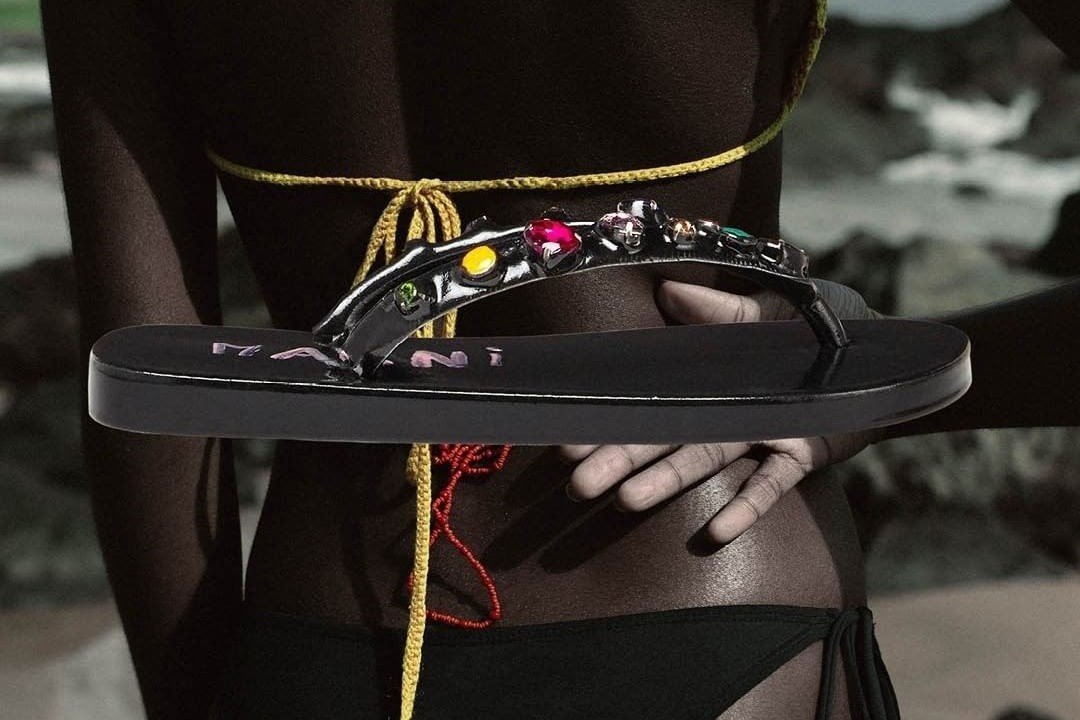 A similar aesthetic was used in Diesel’s 2001 ad campaign in which glamorous black models appear in a spread in the fictitious tabloid The Daily African [Fig. 3]. Headlines are superimposed on young, beautiful and wealthy African men and women indulging in frivolous excess. European nations are oppressed; Africa is the oblivious oppressor. The irony is that global white supremacy is flipped on its head in such an extravagant and luxurious way. The all-black casting was exploited for its shock value, a tongue-in-cheek inversion of of white man’s burden. 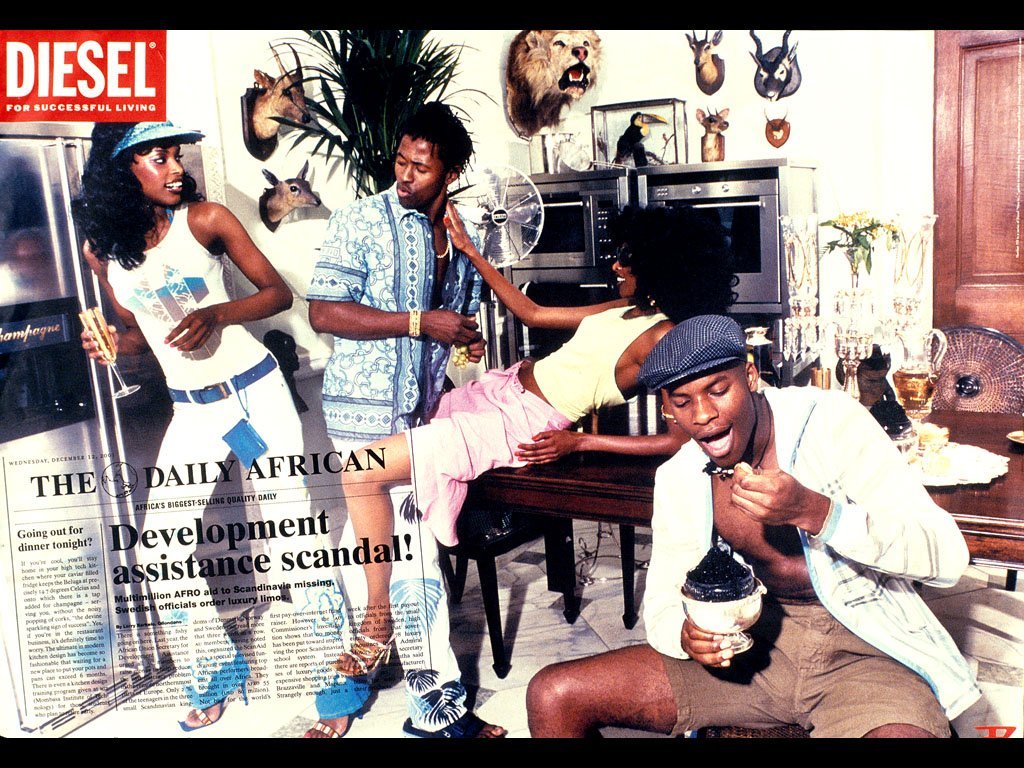 In the last few years, Gucci has been on the forefront of more inclusive runways and fashion spreads, and has proactively tried to atone for missteps of its design team: the use of a Sikh turban on its runway, the poaching of Dapper Dan’s designs, and, most infamously, its ‘blackface turtleneck,’ etc. Before these snafus, Gucci launched their “Soul Scene” Pre-Fall 2017 ad campaign, which was inspired by the photography of Malick Sidibé [Fig. 4]. In the fashion film, black models were cast for Soul Train-style dance montages, decked out in Gucci’s latest wares. The film shows an example of black models being used to evoke campy vintage nostalgia that harken back to blaxploitation films of the 1970s and what historian Tanisha Ford has termed, “soul style.” 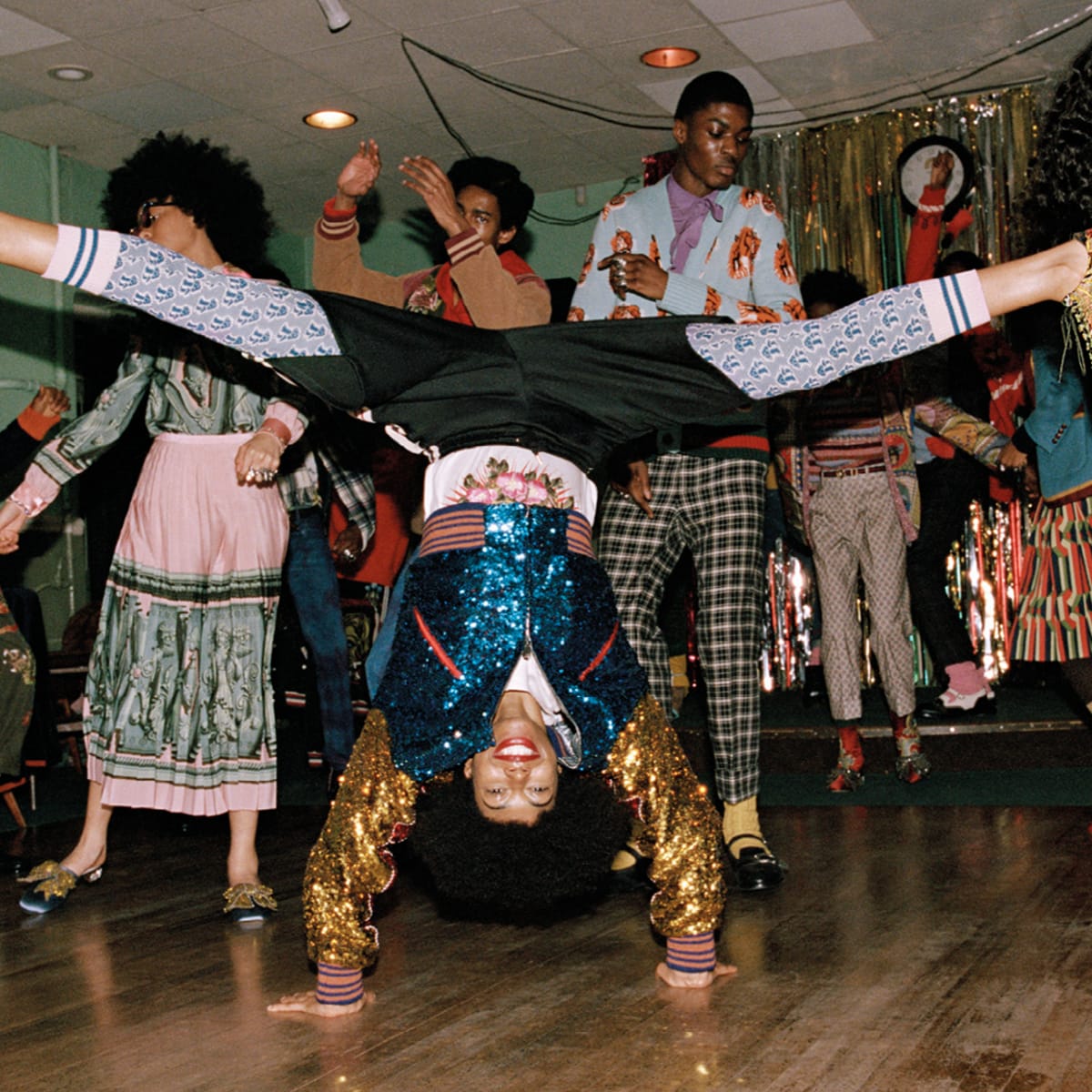 Camp is not the only aesthetic sensibility evoked in all-black casting–’inclusivity,’ an au courant value in our current age of woke-washing and Diet Prada-induced call-out culture, is called forth in the use of all-black castings. Vogue Italia’s 2008 ‘A Black Issue,’ for example, was applauded as a radical act of inclusivity [Fig. 5]. This issue was seen as responding to decades-long calls for more diversity in the fashion glossies and was met with few critiques – the most notable exception being by Brandi Thompson Summers. It, in fact, is a collector’s item today. But the use of only black models in this issue was an example of what we call today, “corporate virtue signaling.” It was a radical shift in the opposite direction to quell anger over a lack of diversity and show to the world that it was not entirely tone-deaf. It did not, however, reflect a structural change in how the magazine was run and who would subsequently appear in its pages.

Shouldn’t we be creating images in which people of African descent predominate? Don’t these images throw wrenches into the visual language of racism? Don’t these images chip away at global white supremacy – spread by spread, print by print? The problem, in my opinion, is that in the cases above, blackness is relegated to its ability to signify and, for that reason, the implicit consumer of such images is not black. Images of black people are not used to convey nuance, or grace, or subtlety, or simply humanity. Their blackness is reduced to exoticism, camp, or avatars of inclusivity.

Casting only black models is not always bad; it’s even applaudable when done right. Zendaya, for example, casted only black models for her fashion show of her Spring 2019 Tommy Hilfiger collaboration, including the septuagenarians Grace Jones and Pat Cleveland. Sean Combs famously casted all black models for Sean John’s Fall 2008 collection—and consistently hires black and models of color for the majority of his shows. Edward Enninful is known for occasionally casting only black models, most notably in the 2018 Pirelli Calendar. Fashion wunderkind Tyler Mitchell collaborated with JW Anderson to shoot the brand’s Spring Summer 2020 campaign, for which he chose all black models. These are not examples of one-off gestures; these represent genuine interest and efforts of including black people in fashion spaces on more than a temporary basis. The use of black models was not a marketing ploy; these designers and artists have made centering blackness a tenet of their creative practice.

But let’s return to some of the examples that were used in the beginning of this essay. Who was on the next cover of Vogue Italia after the much-lauded July 2008 “Black” issue? The August 2008 cover featured a funereal fashion spread shot by Steven Meisel that included eight white models [Fig. 6]. What followed the all-black Pre-Fall 2017 campaign shot by Glen Luchford for Gucci? Another campy space-themed fashion film also shot by Glen Luchford that, as far as I can tell, included no black models.

Diversity should be made intrinsic to a brand’s ethos and an ongoing conversation, not just an aesthetic, after which ads and campaigns go back to lily-white casting once calls for diversity have been quelled. Though I applaud all-black castings when done genuinely, I would challenge brands and magazines to sustain diverse castings–not make it a gimmick and then go back to the status quo after self-righteously patting themselves on the back.

Implement more inclusive casting? Yes, please! All-black casting is not bad in and of itself. That said, I would encourage brands to resist the tendency to over-correct. I would encourage them to act thoughtfully and make sure that their actions have lasting effects. I would encourage them not to wait until another black man is choked to death on the street to realize that representation matters. And don’t use black bodies as window dressing or, worst, an egregious display of moral grandstanding. 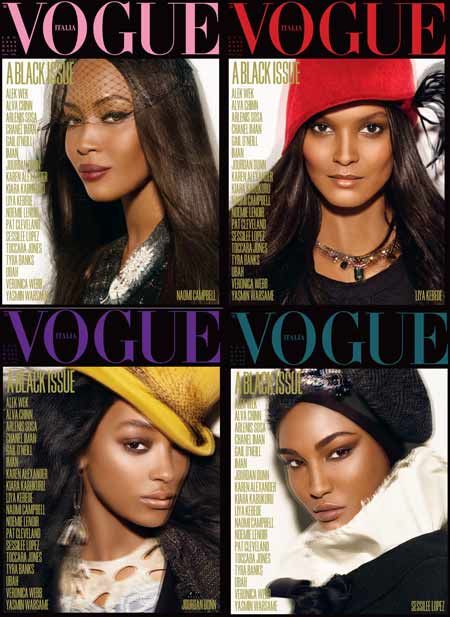 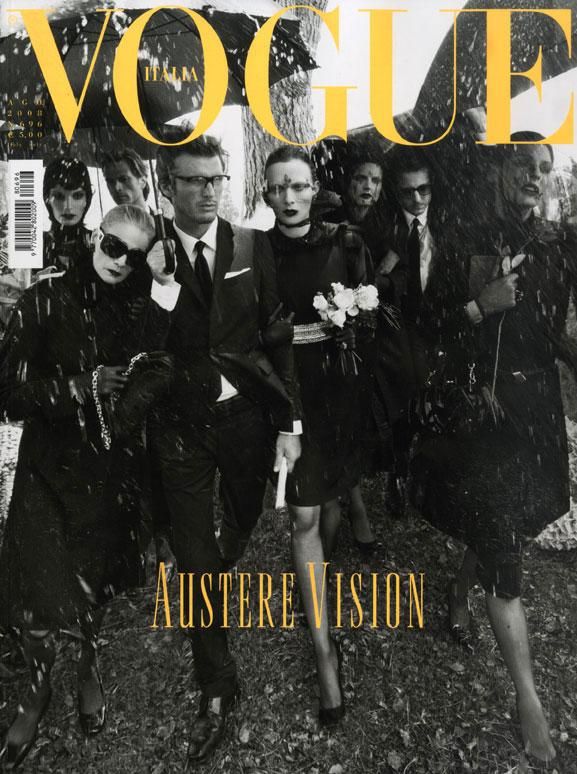 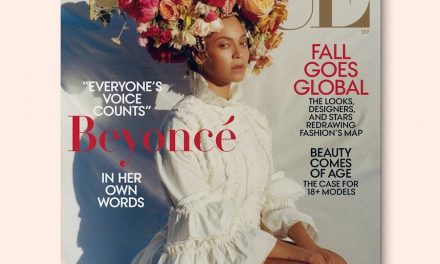 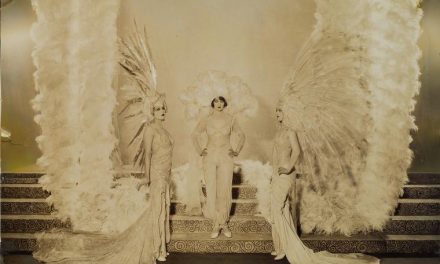 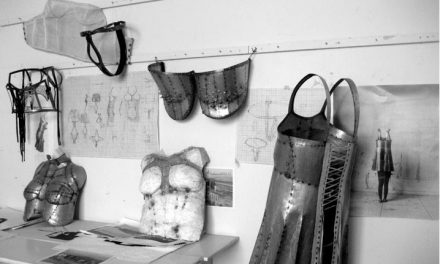 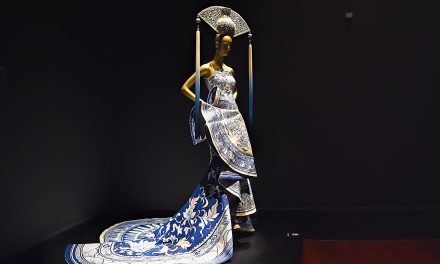 The Transorientalist Nature of the Blue-and-White Porcelain Aesthetic