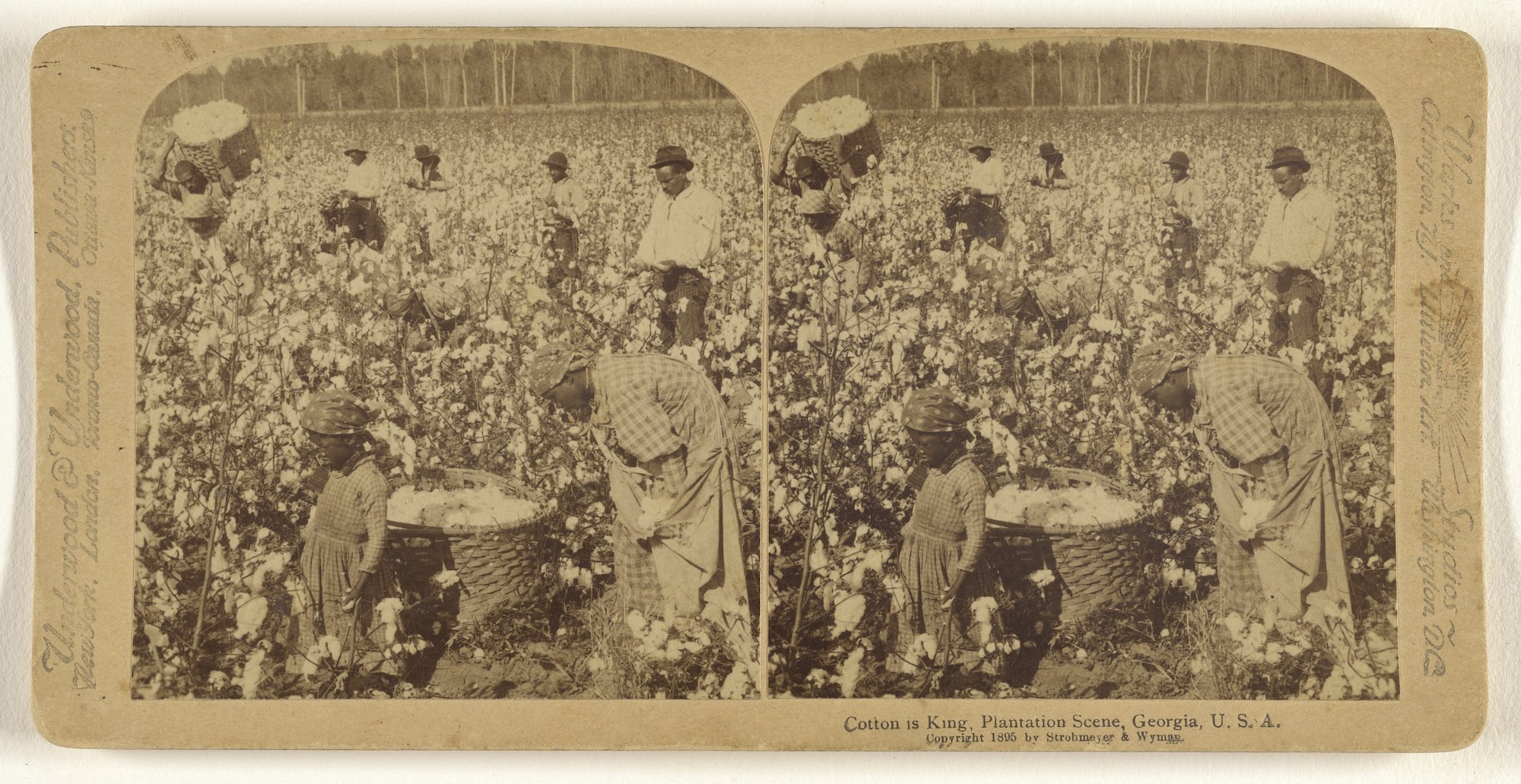 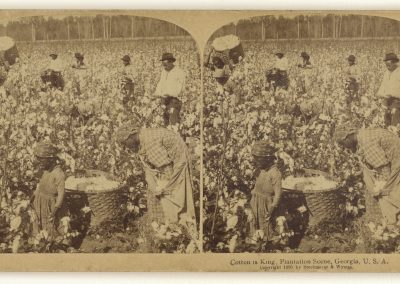 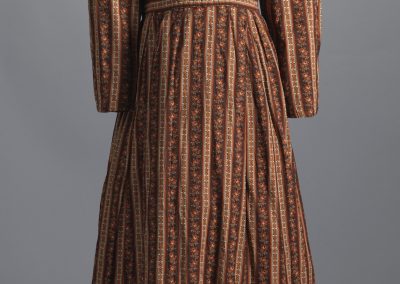 Dress made by an unidentified enslaved woman or women, cotton (textile), muslin, c. 1845-1865. 2007.3.4. Collection of the Smithsonian National Museum of African American History and Culture, Gift of the Black Fashion Museum founded by Lois K. Alexander-Lane. 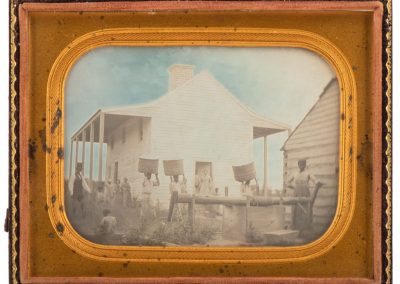 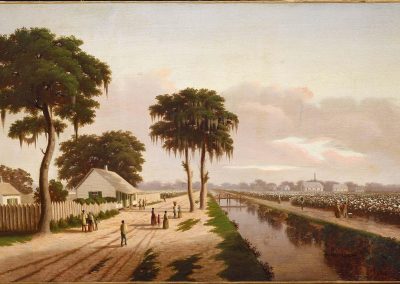 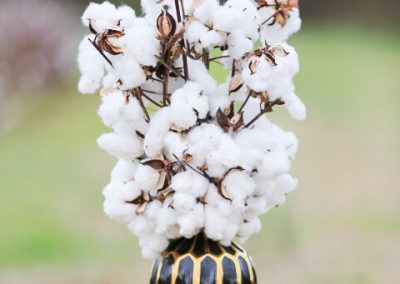 Cotton is a widely accessible and cheap material with complex histories and global implications. Although several continents have grown and used the material for millennia in the development of their dress, its placement in the American South is particularly fraught with trauma. Cotton was first cultivated probably around seven thousand years ago. It sprang up separately on many continents, in regions close to the equator such as Central America, North Africa, and South Asia. As the world globalized, both organically and by colonial ventures, from the 1st century CE onwards, South Asian cotton varieties were among the most sought-after.

Although there was some familiarity with cotton in Europe in ancient times, Arab merchants and empires introduced the fiber to the Mediterranean in greater quantities in the 9th century. With European imperialism pointed westward and Trans-Atlantic slave trade especially between the 16th and 19th centuries, cotton exports gradually shifted away from the east. Enslaved Africans and their Black American descendants were principal cultivators for the North American cotton industry, although large-scale production was not achieved until the development of the cotton gin in 1793. Thus by the 19th century, India and China were no longer the leading producers of cotton.

Before the rise of the cotton industry in the American colonies, indigo was one of their most profitable crops, and was also known to Europeans from trade with Asia. First promoted in South Carolina in the mid-18th century, although it was grown in colonies from Virginia to Louisiana and in the Caribbean, indigofera contributed to the plantation system moving steadily into the interior. Like cotton, the indigo plant was cultivated in tropical climates globally. There is a long history of indigo usage in Africa and Asia, evidenced in adire, block-printed, and batik textiles, especially as Greek and Muslim merchants moved the commodity along land- and sea-based trade routes. Although the cash crop was not an economically viable crop for long after the American Revolution, indigo-dyed clothing came to make up parts of “Negro cloth.” It was used to differentiate the enslaved from their enslavers, before it was co-opted and popularized as a working-class garment by Jacob Davis and Levi Strauss.

The Trans-Atlantic slave trade was abolished in 1808, but this didn’t change much, as trading within the newly established United States continued. American enslavers transitioned to “chattel slavery,” whereby enslavement was hereditary and enslaved people were considered personal property. For North America to dominate the global cotton market, unpaid, forced labor was exponentially utilized to the point where, by the start of the Civil War, over 60 percent of all North American exports was cotton.

Africa, Asia, and the Americas, although global trade has resulted in cotton domestication and manufacturing almost everywhere in the world today.

Many Indigenous groups centered around tropical climates or equatorial regions around the world, including enslaved Africans and their descendants in the American South.

Cotton grows in bundles on flowering bushes and trees. Its lint is separated from the seeds and shells, beaten with tools to flatten into manageable states, and then spun into fibers. It was initially harvested in labor-intensive, small-scale manners. With global trade across continents, mechanical devices — such as spindles, spinning wheels, cotton gins, and current machines — are now used to manufacture cotton textiles and fabrics.

Historically used internationally as markers of status and wealth. Now used in all manners and for quotidian purposes. It is no longer relegated to populations around warmer climates, and can be used for clothing, furnishing, cleaning, storing, and other purposes.

Industrialization and wealth formation from then on was a direct result of chattel slavery, with mechanization allowing greater collections of raw cotton and capital. Cotton became the biggest staple and export at this time, called “king” and “white gold” at the expense of enslaved Africans and displaced Indigenous groups, whose land was taken for growing the lucrative crop:

“Without firing a gun, without drawing a sword, should they make war on us we could bring the whole world to our feet […] What would happen if no cotton was furnished for three years? I will not stop to depict what everyone can imagine, but this is certain: England would topple headlong and carry the whole civilized world with her, save the South. No, you dare not make war on cotton. No power on earth dares to make war upon it. Cotton is king.” [1]

Although the fabric was comfortable and sent to the North and back across the Atlantic Ocean for profit, enslaved Black Americans were forced to wear coarse linen, wool, and other cotton-blend clothing. This was especially true if they worked in the field; domestic enslaved men, women, and children were sometimes given access to higher quality clothing during the 19th century. Unless the enslaved were able to self-provision with their enslavers’ scraps, better quality fibers, colorful fabrics, or more material than was normally allotted to them, their dress remained stiff and cheap. For the most part, despite cultivating, harvesting, and weaving this material, Black Americans were not allowed the luxury of wearing it.

After the nominal abolition of slavery in the 1860s, the peculiar institution again evolved into sharecropping. During the Reconstruction Era, cotton plantations continued to thrive under this new version of labor, and the crop remained key to colonial economies. It was not until World War I that the devastation of the cotton industry came, due to boll weevil infestations. Thus for the entirety of the 19th century, Black American productivity was pivotal in the making of a profitable American economy that was of no benefit to them. Although U.S. wealth today disproportionately sits beyond the reach of descendants of enslaved peoples, some innate skills and knowledge have resiliently survived into recent decades, and is evident in the reclamation of cotton in its various uses. 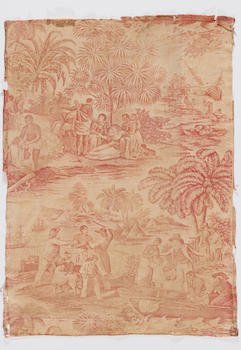 As it is described, this textile was used as propaganda to garner attention for and support of abolitionist movements in Great Britain. There were seemingly good intentions going into the printmaker’s design of this pattern, which illustrates scenes of Morland’s paintings referencing moral values and the horrors of enslavement. But, it is printed on the very fabric driving chattel slavery in the American South, and therefore continued supporting colonial industrialization and wealth accumulation. 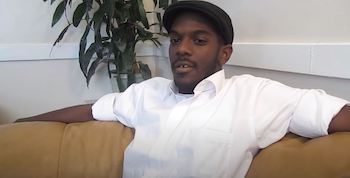 In an earlier YouTube video, a young man recounts a funny, but poignant story of his 3rd grade class picking cotton on a school field trip in Alabama. In another video the speaker, Kendall, shares that he no longer wants the original viral video associated with him as he matures and enters into his field of study. Despite the humor in the original story’s context, he notably touches on current American teaching practices in which Black students and students of color are subjugated to insulting situations, where they relive their ancestors’ traumas.

Image: Still from Kendall’s Response to “Sharecropping” on YouTube. 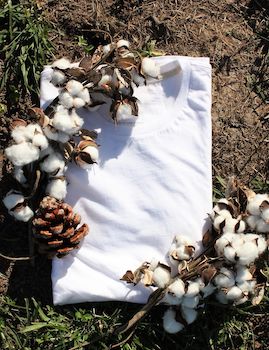 This Black woman-owned and ethically sourced company seeks to empower marginalized people through a more sustainable practice with thoughtful products, services, and a farmer enrichment program. Seed2Shirt works toward creating and restoring equity for farmers in the African and Black diaspora, reclaims cotton in an eco-friendly and non-abusive structure, and allows for Black representation in the apparel manufacturing industry. 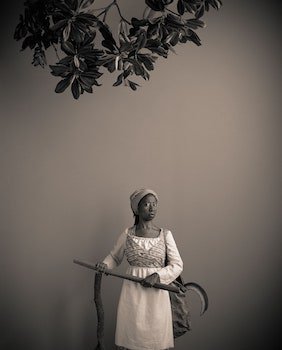 Brooklyn-based artist Dread Scott presented “Slave Rebellion Reenactment,” based on the largest enslaved rebellion in American history. After learning about the 1811 uprising in New Orleans, costume designers, musicians, and actors were employed to “[resurrect] the past to further egalitarian change in the present.” [2] As an artist creating works in response to injustices, Scott ensured that 19th century enslaved fashion set the stage for this activist and revolutionary performance. 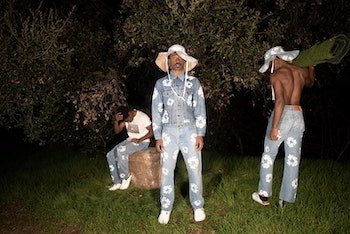 Founded by designer and artist Tremaine Emory, Denim Tears first debuted with the 400th anniversary of slavery in America. Emory was approached by Levi’s for a collaboration, and his practice of depicting wreaths of cotton onto vintage denims took on a broader audience. Through these designs, the brand seeks to tell “stories of the oppressed,” [3] and make these topics of marginalization more accessible and relevant to everyone. 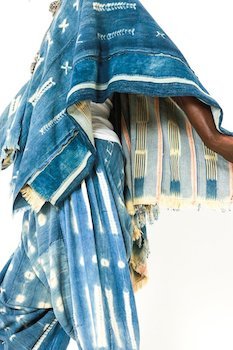 The first sustainable denim-based brand in Harlem, this company makes genderless, luxury denim to pay homage to “untold history of Indigenous American and enslaved African’s contributions” to American manufacturing. Founded by Miko Underwood, her brand uses eco-friendly and repurposed materials, and a portion of profits supports an organization for youth impacted by parental incarceration. This particular poncho is made of 100% cotton dyed by indigo, directly referencing traditional methods and styles used in West Africa.

[2] Lucas, Julian. Muskets! Axes! Revolt! Here Are the Plans for a Reenactment of an Actual 1811 Rebellion. September 9, 2019. Vanity Fair. https://www.vanityfair.com/style/2019/09/dread-scott-slave-rebellion-reenactment. 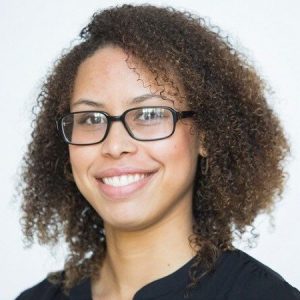 Tayana Fincher is the Volunteer & Interpretation Coordinator at the Isabella Stewart Gardner Museum, and former Nancy Prophet Fellow in Costume & Textiles at the RISD Museum. She received her B.A. in Art History and History from Williams College, and curated “It Comes in Many Forms: Islamic Art from the Collection” at RISD in 2020. Her research analyzes continuity and pluralism in the diaspora arts of African and Islamic regions. 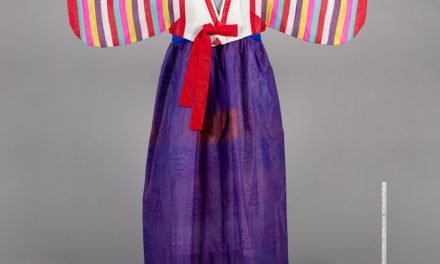 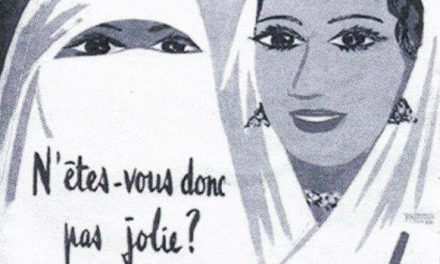 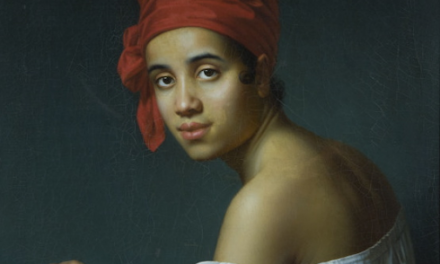 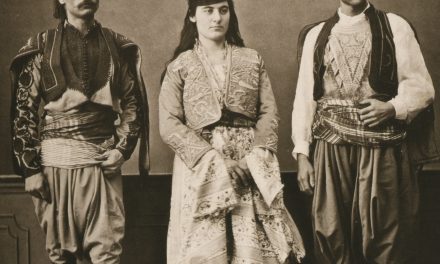